« Own the cache!
Don't keep a saga in both camps »

Six years ago, in July, I wrote for the first time about my experience as a stand-up worker and the reasons behind that decision. A few months later, in a second article, I provided technical details about my setup.

Am I still satisfied?

Absolutely yes. I would never go back. I work standing up most of the day. I sit down only for two reasons:

Recently, my setup changed a bit. Until a year ago, my screens setup was a Full HD portrait screen on the left (23”), a landscape 4K in front of me (28”), and another portrait, Full HD, on the right (23”). I was using the 28” 4K screen at 150% DPI scaling. The only disadvantage of that setup is that using different screens at different DPI scaling creates weird effects when dragging windows across the screens. 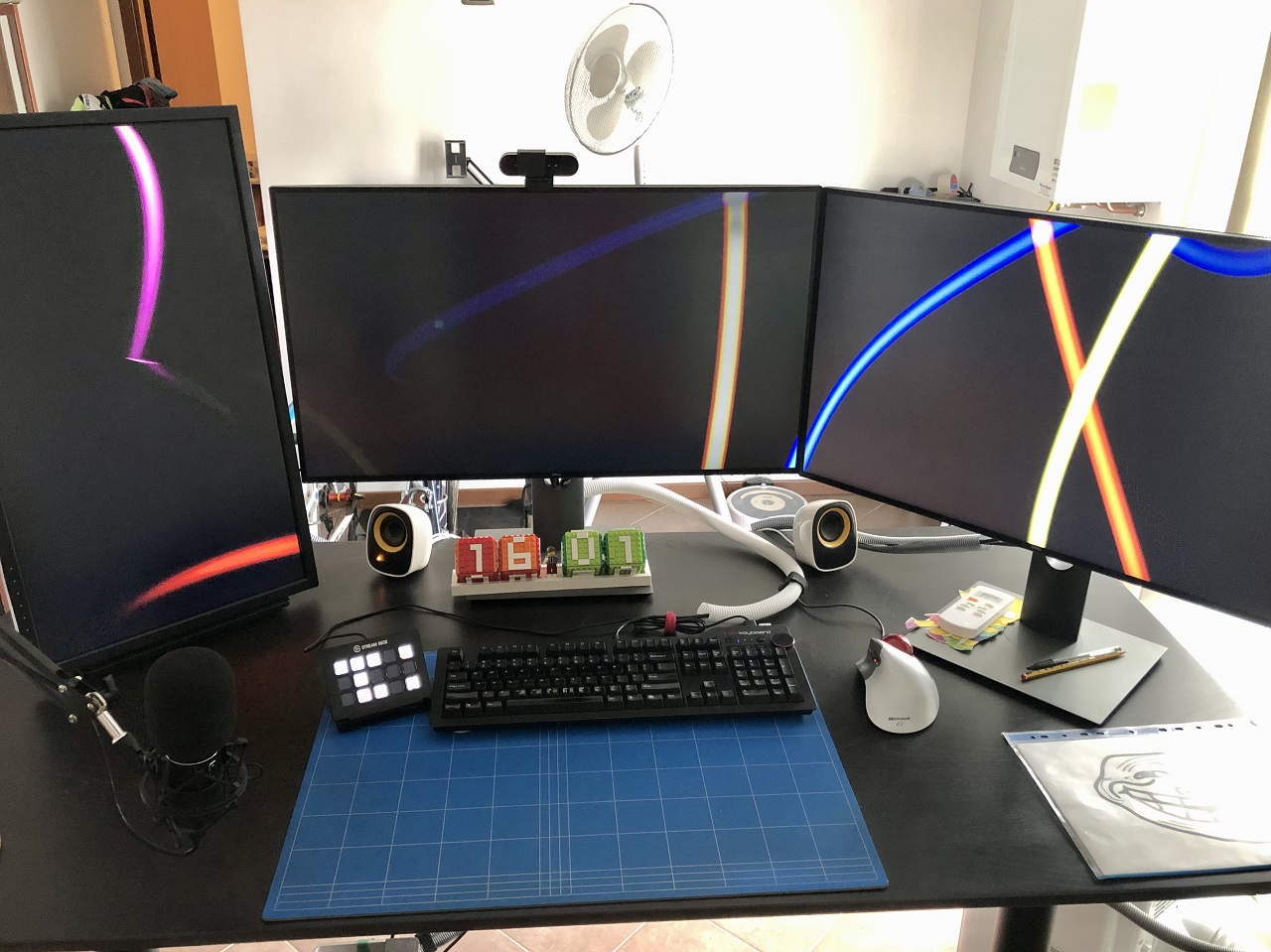 The angle of the left and right screens is still about 40°. The reasons behind the choice didn’t change. To look at the left and right screens at lower grades, I only need to rotate my neck slightly. In the long run, that movement leads to pain and eventually strain. With a higher angle, I rotate my shoulders, and given that I’m standing up, I end up turning most of the body without involving the neck in the movement.

I tried, and I failed. I bought a Samsung C49RG90 (49”) curved screen. It’s a great device that doesn’t work for me. It’s primarily a problem with the curvature radius; it’s too low. The long-term effect is the same as having a three-screen setup with about a 15° angle between them. I rotate the neck leading to pain. Not to mention that the screen is so large that to look at the far left and far right sides, I needed to slide left or right due to the limited radius. I returned it after having used it for a day.

When I’m in my home office, I usually stand on bare feet: no shoes, no socks, no slippers. In the long run, that’s not healthy. Our feet are not anymore designed to stand up that long with no supporting device like a proper pair of shoes. About four years ago, thanks to Daniel Marbach, I bought a balance pad. It’s this one from Airex, but wider, I couldn’t find the exact model anymore.

The balance pad comes with two advantages and no side effects, as far as I can tell. The first advantage is that it makes standing up on bare feet much more comfortable. The second, and more important, is that the balance pad forces you to move constantly, micro-movements, so that your back muscles are constantly stimulated.

Nothing special. I’m delighted with my current setup. However, I’ve been brainstorming a couple of minor things for a while lately.

The height at which monitors are don’t satisfy me completely. I feel they should be slightly higher, but the default stand doesn’t allow for more extension. The only option would be to use VESA arm mounts, which come with a few side effects. 32” screens are heavy, the required arm is both expensive and heavy, and will add weight to the desk. I would need three arms, which means a lot of weight; this would lead to a second issue: the desk, when fully extended, wobbles a bit. Adding more weight, not evenly distributed, will cause more wobbling. I’m not sure what to do yet.

If something else pops up in my standing desk setup, I’ll report back in a future post—hopefully, earlier than eight years.

Photo by v2osk on Unsplash