We have the following pretty complex integration layer to move data from AS400 to a much more confortable structure on MongoDB: 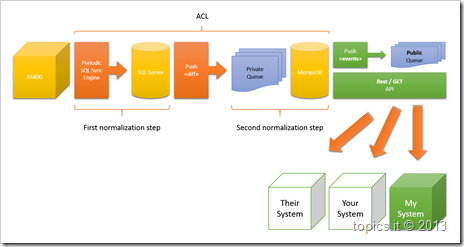 We set it up and deployed in a staging environment to start testing, the first normalization step is out of our control and is periodically run every 15 minutes, currently, but the plan is to move it to a 5 minutes schedule in the future.

Everything works fine so we started doing some real testing with some load, so to be able to measure performance and to try to predict what will be the worst scenario in production.

Once the first normalization step is completed, for every detected change in the source AS400 a message is pushed in our listening queue (MSMQ), for each message we go back to the source SQL Server, call 3 or 4 (depending on the incoming message) stored procedures, transform data an store them into MongoDB.

The whole process, in the not so fast, staging environment takes 238ms per message, at first I thought: pretty good, with all we do processing 4 message per second is not so bad…well, not so bad unless we take a look at how the AS400 production environment behaves during normal operations.

The worst case we observed is something internally called “massive update” (it is not so hard to understand what the scenario is):

We started doing some performance investigation and, to make a long story short, we discovered that:

So now we have:

it is still not enough to face a “massive update” on a 5 minutes window, but now we can introduce some more logic that:

And given the above conditions we can safely say that even in case of a “massive update” we can react properly, may our processing time won’t be within the 5 minutes window, but since massive updates are not something that happens daily we can tolerate it.

I recently had the opportunity to deliver talks at the following events:
Each event lists links to slides, demos, recording, and additional material. Check those out.