« WPF hosting an Adorner in a template
RavenDB: map index »

During my daily work I’m currently using nuget a lot and after adding some dependencies the references of one of my projects looks like the following: 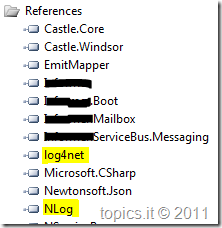 I deeply think that a framework should not impose nothing more then the framework functionalities to the user, but in those cases it was imposed to me also the dependency on 2 different logging framework.

I have nothing against both logging infrastructure, what I only want to point out is that now in order to have logs in one single place I am forced to adapt the output of one to the other, or, much better (or worse), of both to System.Diagnostics.Trace.

7 July 2022, 17:00 • I'll be at UGIdotNET Small Talk, online. Check it out!
I recently had the opportunity to deliver talks at the following events:
Each event lists links to slides, demos, recording, and additional material. Check them out.